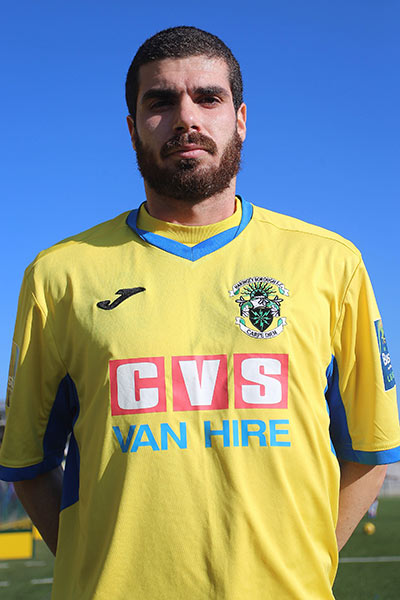 What a way to start the new season after the trials and tribulations of the close season. This new look Boro side with a few notable players still to feature showed all the determination, grit and no shortage of flair to prevail against an organised hard working Corinthian side. The wind played its own part and Boro certainly shaded the first half without causing Bracken in the Corinthian goal too many problems. In fact but for a fine save from Pajetat in the Boro goal thwarting Pinney’s strike Corinthian may themselves have taken the lead.  Aresti ( pictured ) in midfield orchestrated proceedings for the Boro at every opportunity showing the value of retaining his services this season . 0-0 at half time and whatever was said by Tom the boys came out all guns blazing and deservedly took the lead on 50 mins with debutants Akinola and Onokwai combining to finish off a move as first Akinola beat Bracken to the ball and when the  ball fell kindly to Onokwai he made no mistake from short distance. The Boro faithful of over 400 sang their praises and with Matt Rider and his drums banging away to the tune of the songs emanating from the Bell End boys ( well most of them minus those invited to the wedding of bell ender Liam Curry and his beloved Siobhan – poor timing if truth be told !!) it was very much same as usual following last seasons incredible achievements.  The amazing  fans succeeded in recreating the same vibe and atmosphere as last season and making such a difference to  the players. However , whilst all seemed dandy , Corinthian were by no means overawed and certainly pressed forward in numbers to try and get themselves back on level terms. With the dangerous Sitch breaking through only the last ditch challenge from Rowe kept him at bay and then Tucker had a great opportunity and was denied once more by the excellence of Pajetat . Late on Boro came close to a second as Onokwai once again combined with Akinola only to see his effort well saved by Bracken . With Richards and Rowe along with more debutantes in Alexandrou and Kisitu the Corinthian attack was held at bay .The final whistle sounded much to the relief of the Boro faithful and and with the injured players to return Boro have shown they have a squad of depth and will hopefully be challenging throughout the season. Next up a trip to Leatherhead on Tuesday where we hope the ugly scenes of last season are not repeated – neither Club  coming out of that encounter with any credit .