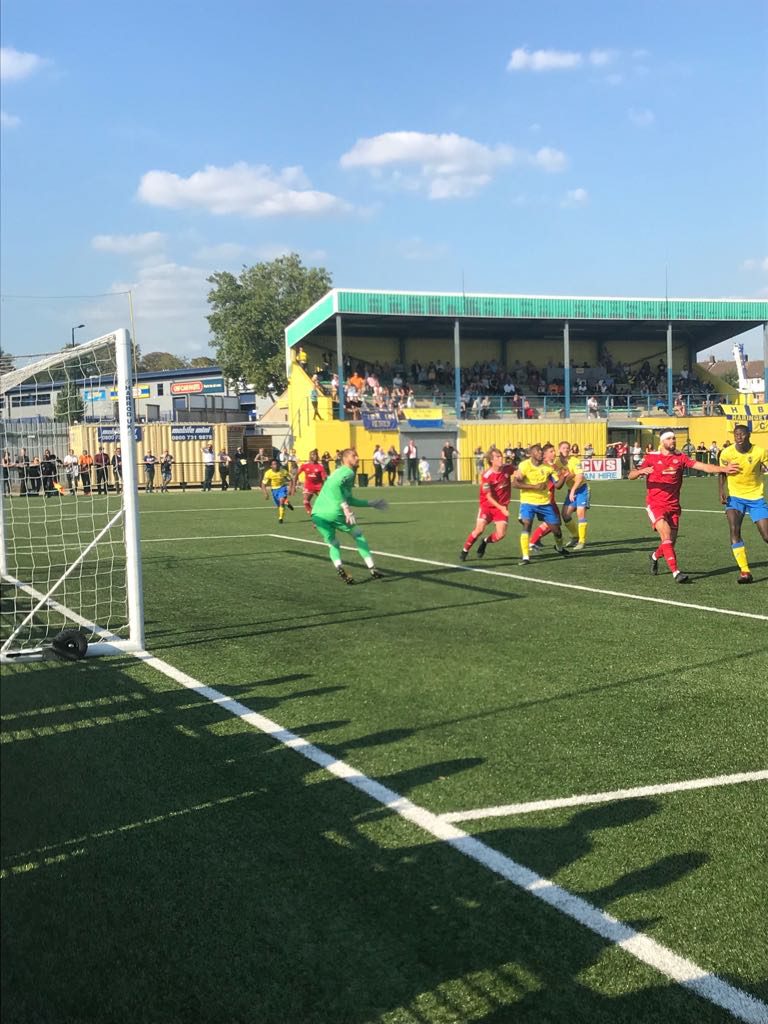 Boro were left wondering how they did not at the very least get a point from this game . In the opening exchanges Worthing had all the possession but hardly troubled Pajetat in the Boro goal. Rakim Richards and birthday boy Scott Mitchell were in dominant form at the heart of the Boro defence and one could excuse the absent Kirby who failed to show because he got married !!! With both full backs Olufemi and O’donoghue breaking forward at every opportunity Boro got a very strong foothold in the game and the pace of Ademiluyi will give the Worthing left back ( turned right back in the second half in his efforts to escape !!) nightmares!! Ademiluyi could have had a hat trick bursting through the Worthing back line on 3 occasions in the first half . All efforts superbly saved by Cavagnari in the Worthing goal who was also at hand to save from Mckenzie and Nouble. Th breakthrough that was richly deserved finally came in the 27 minute when another birthday boy Cypriot international Aresti calmly put Mckenzie clean through and he finished with aplomb . Within two minutes however Worthing with their first real chance were level as a shot from Parsons squirmed through the legs of Pajetat . 1-1 at halftime .

In the second half Worthing scored early through the lively Ajiboye moments after Aresti had blasted over the bar with the goal beckoning.This forced Boro into an all out assault on the Worthing goal and coupled again with the keeper and the superb Aaron Racine the Worthing back line held firm. Olufemi came extremely close with a lob that just missed the far post and Ademiluyi again created and spurned a couple of makeable chances. The introduction of Akinwande and Barker and then Sanderson ensured an uncomfortable end to the game but Worthing held on and left with the points. A lot of positives however for the Boro side who gave there all and who on a different day would have comfortably won the game. Credit Worthing who are right at the top for their experienced game management and organisation . Credit also to the supporters who heartily cheered the Boro throughout and with an attendance of 290 it shows that the team are doing something right. FA cup action away at Brentwood next week and then away to Whitehawk on 22 September .