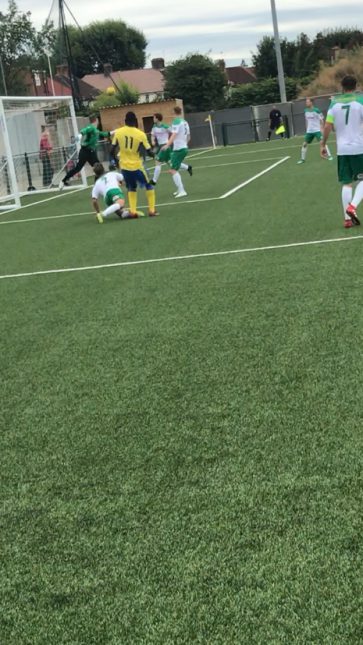 A fantastic pulsating end to end game saw the spoils shared as two young sides put on a great show for a crowd of 246, including many who had made the long journey from Bognor .It was the visitors who had much of the ball in a an even first half but rarely threatened Pajetat in the home goal. Bognor played from the back and Boro seemed happy to let their opponents have possession and then sought to hit them on the break which they achieved on a few occasions . The Bognor keeper Lincoln the busier of the two and one tremendous save from an Akinwande header kept the score at 0-0 . Akinwande and Nouble causing countless problems down the left and Olufemi and Mckenzie similarly from the right . Bognor had some corners that were too often played into the grateful safe hands of Pajetat and apart from a couple of speculative long range efforts didn’t pose much of a threat. 0-0 halftime.

All that was to change within seconds of the second half as Bognor flew out of the traps and a low cross was turned home on 46 mins by the impressive Muitt.

This goal seemed to galvanise the home side and a deserved equaliser followed only 4 minutes later as Nouble capped off a fine individual display when he met an Olufemi cross and swept home. Boro increased the pressure and were rewarded only minutes later when Akinwande scored the goal of the game as he superbly curled the ball in via the post with his left foot from 18 yards.

Boro at this stage continued to dominate and looked more likely to add to their tally. Bognor however had other ideas and after a period of sustained pressure a cross from Smith was diverted into his own net by the unfortunate Olufemi on 72 mins. The equaliser prompted a furious assault on the Bognor goal by Boro who mounted wave after wave of attacks after the introduction of the speedy Ademiluyi in a furious 10 minute spell. Akinwande denied by a last ditch challenge from the superb Wood , Ademiluyi threatened when twice clear down the right side and his crosses just eluding the strikers, likewise Olufemi who broke forward from full back and his cross just passing the outstretched Ademiluyi, Staunton and Barker then skied two efforts from the edge of the box and although the Bognor rearguard held firm they needed the assistance of man of the match Lincoln to keep the scores level. One particular outstanding save from Kirby’s close range header from O’donoghue’s corner defied gravity and Mitchell headed the rebound over from close range .

Boro seemed to take their foot off the pedal and allowed Bognor back into the game and they dominated the final few minutes and will count themselves unlucky not to have taken all 3 points . Pajetat making a couple of fine saves culminating in a superb tip over the bar from a Davies free kick with a couple of minutes to go . Honours even at the end and a great exhibition of fast free flowing football from both sides . A great start to the new season in a new league for the Boro who did not seem out of place in such exhaulted company .

Tuesday sees the boys travel to Brightlingsea . Hopefully a few of you will be able to make the journey to spur the boys on.