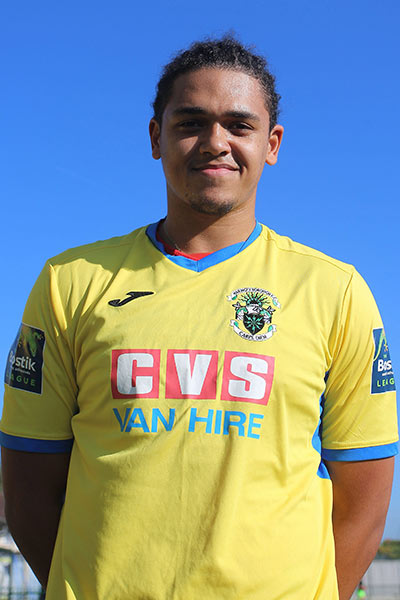 In front of another great crowd of 523 Boro maintained their promotion charge with an emphatic win against their play off chasing rivals.Boro were quickly out of the blocks and after one minute Rakim Richards shot wide when well placed . After a couple of close efforts by Oyenuga Boro deservedly took the lead on 16 minutes as a Coby Rowe ( pictured ) header from a Froxylias delivery beat Carey in the Lewes goal. The goal prompted Lewes however to respond and they did so in style and only 5 minutes later Pope equalised after good work by Coppola. In fact only minutes later Lewes missed a golden opportunity to go into the lead as Coppola was foiled by a brave save at his feet by Pajetat in the Boro goal. Boro re grouped and again started to gain the upper hand and after couple of mazy runs by the impressive Nouble and the energy and spirit of both Oyenuga and Della-Verde up front it looked only a matter of time before Boro regained the lead. However some excellent defending and good goalkeeping thwarted Boro and at half time the teams were all square at 1-1.
The second half started cautiously but Della Verde had a chance as he cut in from the right wing and curled an effort with his left foot just past Carey’s far post. The same move on 58 minutes this time by Froxylias had a better outcome for the Boro and his curled effort from an identical position found the bottom corner. Cue a fast and furious wide open game as Lewes released the shackles in their efforts to get back into the game and as a consequence Boro’s speed in attack led to chance after chance . Carey saving well from sub Akinwande twice , Kirby hitting the post, Rowe having an excellent header cleared off the line , Nouble blasting over when well placed. At the other end nerves were jangling as Lewes attacked in search of the equaliser, a couple of deflections going just wide and Pajetat equal to everything else thrown at the Boro rearguard. With Richards, Mitchell, Kirby and Olufemi closing down impressively Lewes were left to try their luck from distance and apart from a couple of hairy moments near the end Boro held firm and took the much needed three points . Boro maintained their position in second place and with 5 games to go look set for a play off place . No time to let up however with the chasing pack hot on their heels. Next up Hornchurch away 6 April followed by Kingstonian home at 3pm on Saturday 13 April