Bring On Next Round of FA Trophy! 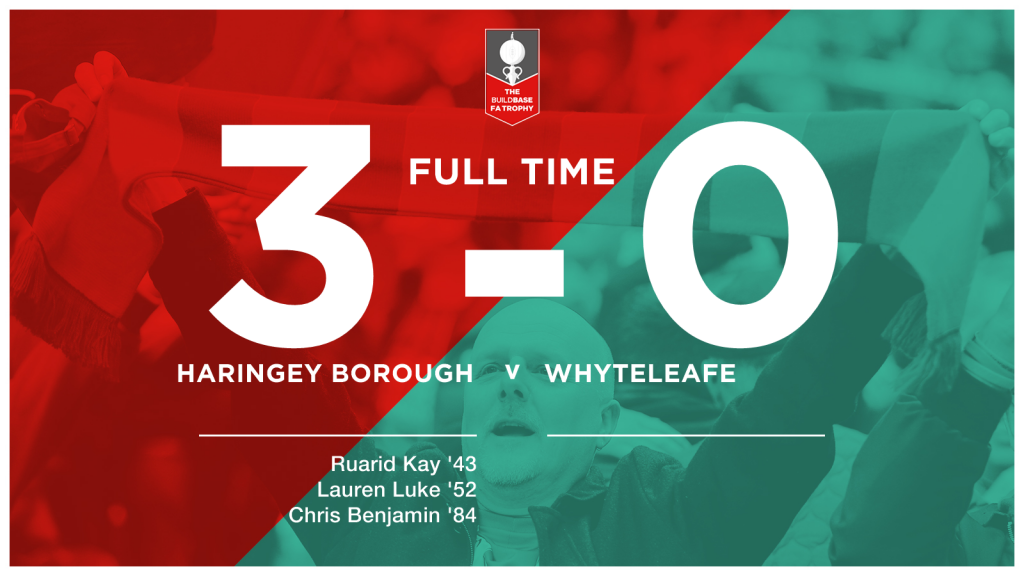 Haringey Borough played in their third different competition in the last week, against Whyteleafe, a team running high in the Bostik League South Division and progressed through to the 1st Qualifying Round, where they’ll play Harrow Borough away on Saturday 28th October 2017.

The game started slowly and Whyteleafe had the first chance when their Ross Elsom shot from the edge of the box but wide, with Valery Pajetat, Boro’s keeper (who rightly won the League’s Divisional ‘Goalkeeper of the Month’ award for September) having it covered. A couple of minutes later Haringey’s Ralston Gabriel had a shot but this went high and wide.

The next 30 minutes were controlled by both midfields but Haringey were having the better chances.

Close to the first half’s final whistle, the deadlock was broken. Anthony McDonald, a thorn in Whyteleafe’s right hand side, had a shot from the edge of the penalty area, which Whyteleafe’s goalkeeper did well to keep out and behind for a corner. McDonald swung the ball over and this time the keeper failed in any sort of punch, flapped at the ball and it fell to Ruarid Kay, who shinned it over everyone and into the back of the net.

Whyteleafe had the next chance. From fully 35 yards out Olumide Oluwatimilehio hit a screamer which Pajetat saved smartly at the expense of a corner. McDonald had the last word of the half though, when he hit the bar from a free kick with the keeper well beaten.

The second half was less than 10 minutes old, when Boro scored their second. Again it was McDonald who tore down the left wing, swung over a cross which everyone missed and the ball fell to Lauran Luke, 3 yards out who finished with aplomb.

Like the first half, both teams tried to exert control of the match but both keepers were hardly being troubled. All 3 subs from each teams were used and 1 of these had the final word. Haringey’s slick passing out of defence, ended up with Joseph Benjamin passing it to Chris Benjamin with a high through-ball in the box, who slotted the ball pass the goalie for Haringey’s third.

Time added on was spent mostly with the ball out of play and the ref blew the final whistle with Haringey taking a goal kick.

A good all round performance, with the defence, especially Lawrence Yiga (rock/solid) and once Haringey had scored they didn’t look like they were going to lose.

Next up (October 14th 2017) is Heybridge Swifts in the FA Cup, probably, the biggest game in Haringey’s recent history. A win then and Boro could face the big boys of League 1 or 2.