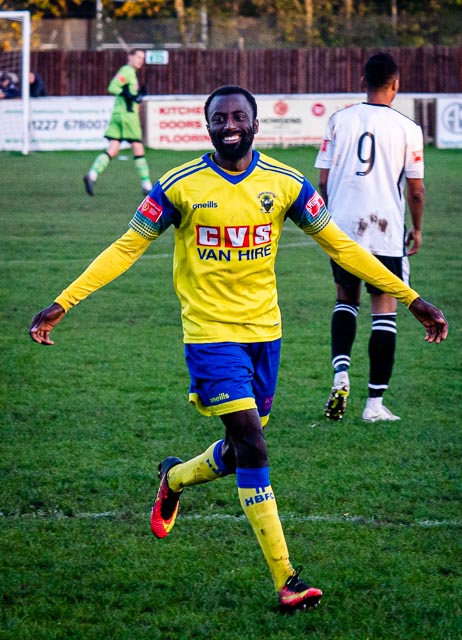 Wow !!!! Who saw that coming ? Boro saved their best performance of the season for this fantastic FA Trophy match against high flying Dartford who are sitting second in National League South . This performance coming only 4 days after 5th placed Eastbourne Borough of  the same division were firmly dispatched in the same competition. After a rather nervy start where Boro seemed either a little overawed by the magnitude of the occasion or perhaps the wonderful Dartford stadium Boro found a foothold in the game which in truth they did not relinquish . Although Dartford had considerable possession they did not create much to trouble Miles in goal and aside from one good save at his near post from close range he was barely engaged in the first half. Even less so in the second half as Boro came out after the break with real purpose and began themselves to dominate the game and create chances . Sambu, Michael – Percil and Mcleod all coming close before Boro got their just reward for such a fine second half display in the 90 minute when a swift move down the left side with Mcleod passing to Michael – Percil who rounded  the defender and crossed to Bawling ( featured )who timed his run to perfection to head home sparking wild Boro celebrations . In fact the only threat to the Boro goal in the whole second half came immediately from the re start as Dartford pushed forward in search of an equaliser and within seconds almost scored when the ball fortunately landed in the grateful arms of Miles. That was the only scare and the final scare as the whistle went and Boro moved into the last 32 of the Buildbase FA Trophy for the very first time. The only down side being the match was played in front of an empty stadium and the Boro faithful were unable to see the match unfold although some did manage to watch from afar  with the Dartford TV  live stream