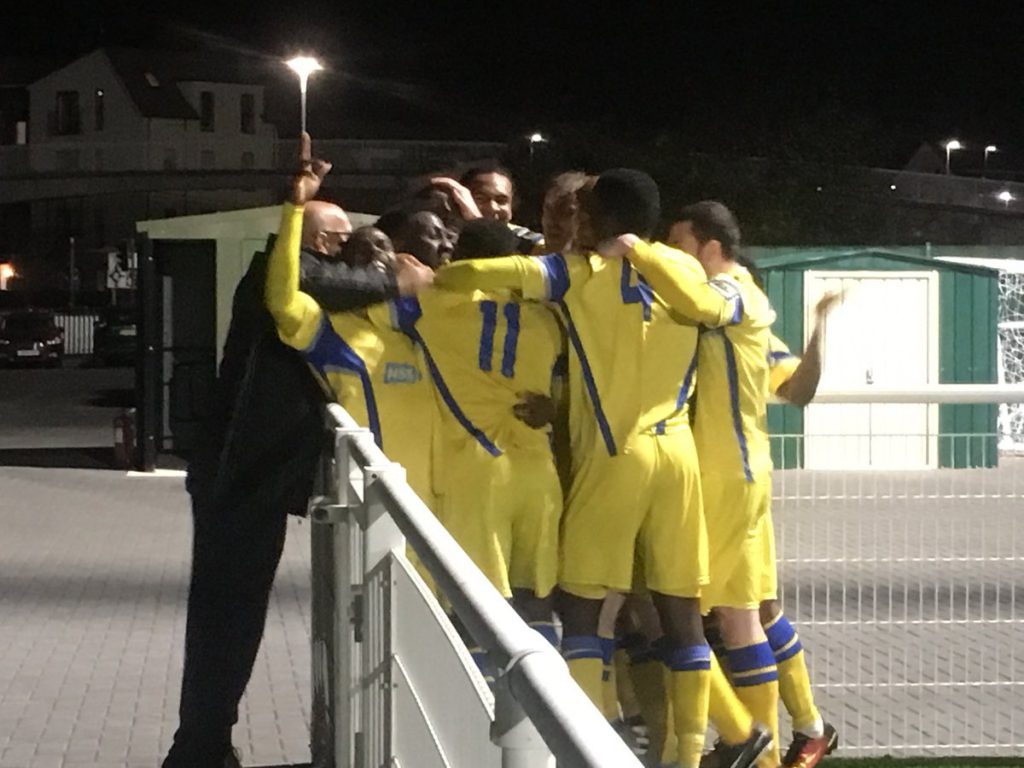 It needed an astonishing come back culminating in a 96th minute stoppage time  equaliser to preserve Borough’s status as the only Bostik team not to have lost a League match this season.  At the interval it was no surprise that Borough were 2 down as they had been second best throughout and had not tested the home keeper at all whereas Valery Pajetat had been given plenty of opportunities to show why he won Septembers ‘Keeper of the Month’  award and duly obliged;  but he could do nothing about the two close range efforts blasted past him after defensive mis-kicks presented Grays with chances in the 37th and 40th minute.    A much more determined Borough were faster out of the blocks after the interval and were rewarded after only 5 minutes when Ralston Gabriel blasted home from close range following a corner.   But a scrappy goal ten minutes later, when one of 14 corners Borough conceded in the match  was only half cleared,  took the wind out of Borough’s sails for a while.   As the game wore on Grays no longer seemed able to maintain the ferocious intensity of their first half performance and Borough seized the initiative, although Pajetat continued to be kept busy too with some vital tip-overs being particularly eye-catching.   However it seemed the unbeaten record had been  lost as time ran  out but two minutes from the end of normal play Michael Ademiluyi and Tosin Olufemi combined well down the right and the latters cross found Gabriel completely unmarked as he buried his header.   Many teams might have shut up shop at that point but Grays actually went for a fourth goal, and came very close to getting it, but paid a heavy price when Ruaridh Kay was fouled some 30 yards from goal in a central position and a cleverly executed free kick by Anthony McDonald  left Gabriel with another unchallenged header to complete his hat-trick and grab Borough a  share of the spoils.  It was his second hat-trick in successive matches following his first half exploits against Norwich United last Saturday.

Next up for BOROUGH is a trip to Bostik Premier Club Harrow Borough in the 1st Qualifying Round of the Buildbase FA Trophy on Saturday 28th.    A home League game against Aveley will follow on Monday 30th but if either Club’s Trophy game is drawn on Saturday then the League match would be postponed and in our case the Replay would take place at Coles Park instead.