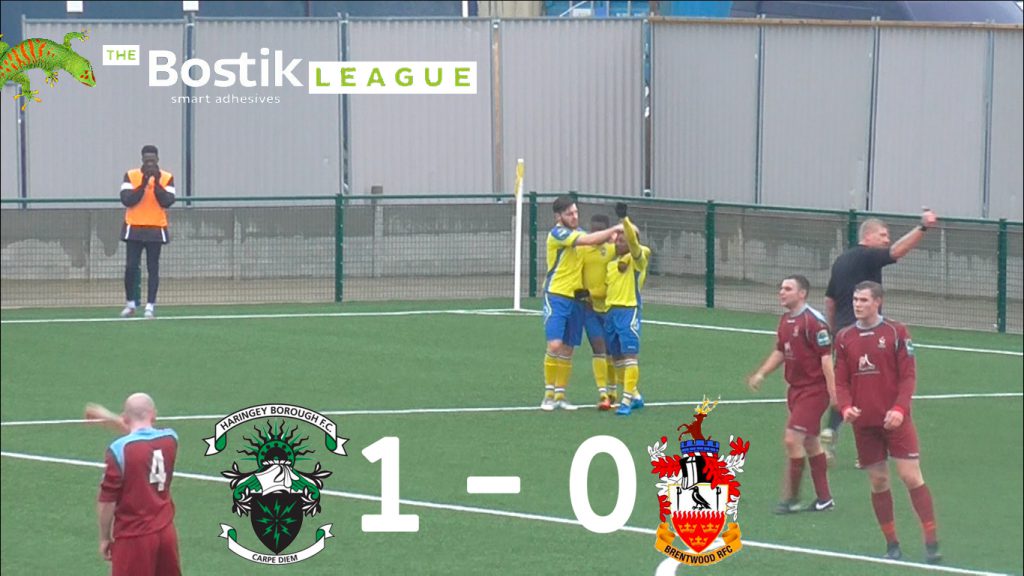 With the temperature starting to plummet, the hardy souls who came to watch Haringey’s seventh home game in just over 3 weeks, witnessed a goal of stunning simplicity worthy of winning a cup final, let alone a league match.

Brentwood, battling at the wrong end of the table but with games in hand, had inflicted Haringey’s first league defeat of the season back in November and were hoping for another 3 points to help in their fight to stay up.

Haringey were the better side in the first half, with Boro’s keeper, Valery Pajetat having complete control of his penalty area, claiming high balls and saving whatever shots that did get through.

Anthony McDonald nearly scored on 10 minutes, when a 20 yard run and shot from the edge of Brentwood’s box was tipped over for a corner.

10 minutes later Haringey scored. Pajetat caught a Brentwood corner and cleared up field, where Michael Ademiluyi controlled the ball, passed the defender, raced to the edge of the box, sidestepped the keeper and rolled the ball into the back of the net. Route one.

Ademiluyi should have made it two, when he put his shot wide from 10 yards out just before half-time.

Haringey thought they had scored a second, when Bradley Sach tapped in, but a linesman’s flag put paid to prolonged celebrations. McDonald went close a couple of minutes later, with the Brentwood keeper saving well.

Brentwood thought they were going to equalise but David Olufemi cleared off the line before the ball crossed.

I wouldn’t say it was all one way traffic but Haringey had all the meaningful attempts on goal with substitute Junior Appiah and McDonald again having chances to finish the game off.

Haringey are now on the road for the next 3 weeks. First up at Ware on Tuesday, then AFC Hornchurch (10th) and finally Hertford Town on the 17th before returning to Coles Park on the 24th where they will have the return game versus Ware.