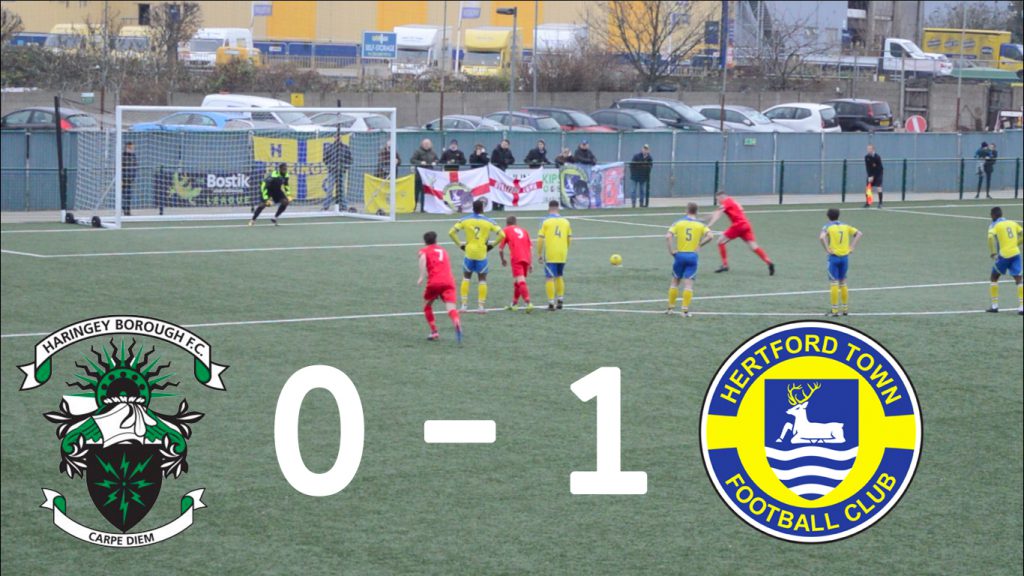 HARINGEY BOROUGH V HERTFORD TOWN
Bostik League Division One North 2nd December 2017 Coles Park Attendance 147
Haringey Borough (0) 0
Hertford Town (1) 1 (Toner)
Haringey’s winless run in the league stretched to five, with a defeat against a Hertford team who were also on a winless run. This match was a game of two halves, two dismissals and a 15 player mass melee. Oh yah, also another penalty, but more of that later.
First up a correction, in my last report versus Thame, I said that Rakim Richards was upended for Haringey’s penalty, in was in fact David Olufemi (also known as Tosin) who was bundled over. Sorry about that, I was given duff information!
Anyway back to the game in hand. As I said two halves that were completely the opposite. First half was all Haringey, where they should have been 3 up before Hertford even had a sniff of the home team’s penalty box. Michael Ademiluyi, Ryan Hervel and Ralston Gabriel each had a chance to open the scoring but Hertford’s defence held firm.
Then totally against the run of play, Hertford scored. Gabriel was tackled on the edge of the Town area and the ball was punted up the other end, in the confusion a Hertford player was brought down and the referee had no choice but to point to the spot.
Hertford’s number 8 Michael Toner stepped up and stroked the ball to Ashley Harris’s left, the keeper got down to it and the ball flew back out to Toner. His second attempt was blocked by Quba Gordon whose clearance again fell to Toner, who mistimed his shot, wrong footing Harris and ending up in the back of the net!
Haringey had another chance to score just before half-time but a Hervel free kick just cleared Hertford’s crossbar with the goalkeeper nowhere.
Half-time Haringey Borough 0 Hertford Town 1
The second started slow but after 60 minutes the 15 man melee happened. A tackle by a Borough player was blown for a foul and words were said and with handbags all round. Hertford players were outnumbered 2 to 1, the referee applied common sense, spoke to the two captains and got on with it. He was having a good game!
Haringey’s goalkeeper was really earning his corn. First Hertford’s Charlie Ruff, then Ricky Light and finally Toner had shots saved by him. Haringey had a couple of chances but none troubled Town’s goalie.
With 10 minutes remaining, Hertford Town’s manager was sent to the stand, for foul and abusive language and it wasn’t the only dissent charge of the match! 3 other Hertford players were booked with 1 Matthew Thompson being sent off for a second booking of ungentlemanly conduct, with the game going into added on time.
The last bit of action involved Boro’s substitute Joey Benjamin, whose shot shaved the post and hit the back sanction. The keeper took the goal kick and the ref blew for time.
A hard game but one that Haringey should have won. Since Borough beat Sittingbourne in the FA Trophy, they have played 5 games winning 1 (h v Thame). From being in a position of 4th, 2 points behind the leaders Canvey and 2 games in hand, to 8th, 13 points behind AFC Hornchurch and only 1 game behind.
The next 2 league games both away to Heybridge (Haringey’s FA Cup concouers) and AFC Sudbury (who Boro’s men team have never beaten) are must not lose games. Otherwise all the good work at the begginiing of the season will have gone to waste.
After the 2 league games, it is possibly Haringey’s biggest ever match since before the war. The mighty O’s from Leyton travel the 5 and half miles north to White Hart Lane, to play in their first ever FA Trophy match. They too are going through a bad patch, 1 win in 18. Let’s make that 1 win in 20!
COME ON BORO!
HARINGEY BOROUGH: Ashley Harris, David Olufemi, Michael O’Donoghue, Ryan Hervel (Kai Heather 82), Scott Mitchell, Quba Gordon, Daniel Aristidou (Chris Benjamin 79), Rakim Richards, Ralston Gabriel, Harrison Georgiou, Michael Ademiluyi (Joseph Benjamin 79)
UNUSED SUBS: Dean Fenton, Ayrton Coley