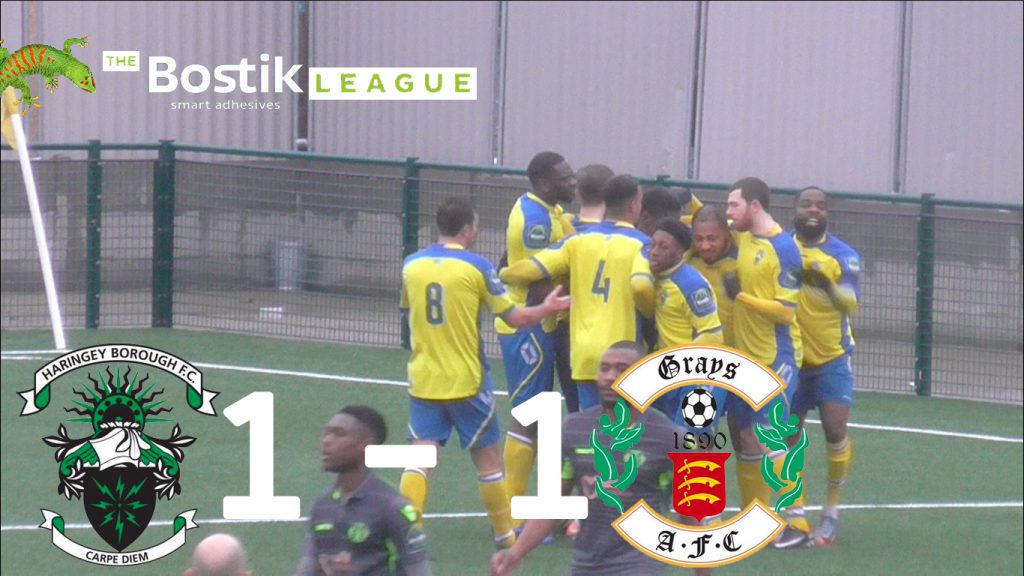 With the rain pouring down in buckets, Grays visited Coles Park in the knowledge that the game was not going to be postponed unless the river Lea burst its banks and flooded the whole of Haringey, Enfield and the Lea Valley basin.

Unlike two seasons ago, when one drop would cause the game to be called off, the new 3G pitch is worth its weight in gold. With Enfield Town and Leyton Orient games both being postponed, spectators from both clubs, arriving at the game knew they hadn’t had a wasted journey. Just a pity the game didn’t live up to expectations.

What can you say about the first half? Well Haringey scored at the very end of it, with Derek Asamoah tapping in from 6 yards after a left wing cross from Anthony McDonald.

Grays hitting the post in the first few minutes and their centre back heading over from 5 yards with no one near him on thirty-three.

Too be honest, the second half was just a bit better. Both sides went in search of goals but final passes were being over hit and going astray. The shame that the pitch was perfect; otherwise the ball could have been held up, forward and defender having a mad dash to reach the ball first like in the mid seventies.

Google Orient Chelsea 1972 cup and watch on you tube; you will see what I mean!

Grays equalised with a goal of quality, worthy of a premiership game. Adeyinka Cole received the ball fully 40 yards out from Boro’s goal, turned and moved forward. Looked up, put the goal in his sights and shot.

Austin Byfield had no chance!

Haringey should have won it with a miss of the season contender. With the match going into time added on, the ball was crossed from the right into Michael Ademiluyi path and with the goal gaping and no defenders for miles, he hit the ball over and into the allotments.

The referee blew just after and a draw was probably the right result.

The next first team game at Coles Park is this coming Monday versus another promotion challenger in Potters Bar Town, kick off 7.45pm.

Haringey looking for revenge after losing the away league game in November. Then for only the second time this year travel away for a game, when they play Soham Town Rangers, where they will try to secure their third league double of the season.