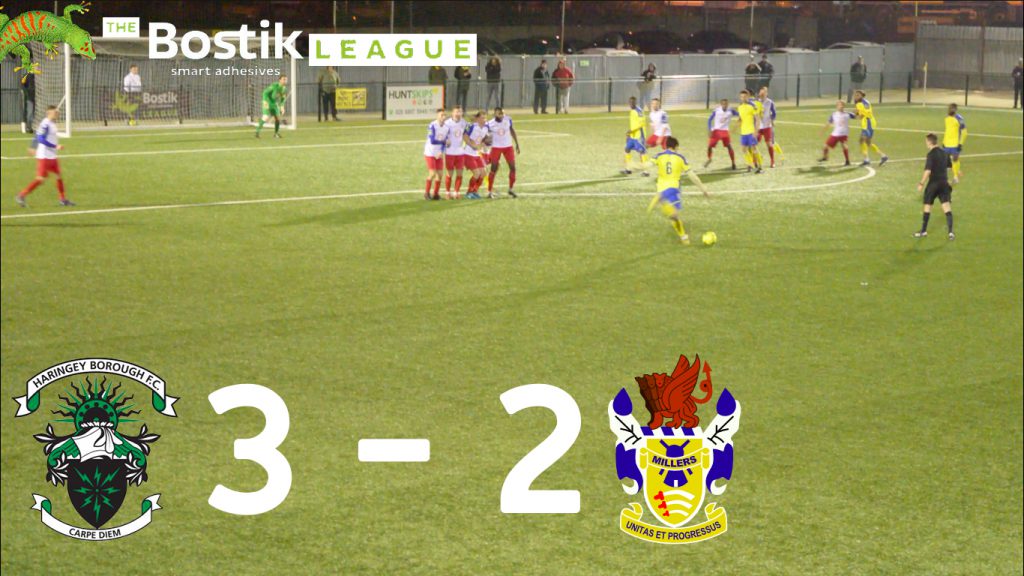 On a near freezing night, Haringey played their 1st of 5 consecutive home league games, against an Aveley side battling for points at the wrong end of the table. Haringey’s form in the league since the beginning of November had been L W L W L W L and now another W. (Heybridge result pending).

The first half started slow with Haringey in control but not penetrating the Aveley area, but Aveley were having the much clearer chances and Austin Byfield was going to have a game to remember.

It all started for Aveley in the 15th minute, when a shot by the right back hit the post, but everyone could see it had hit the wheel behind the goal line! 10 minutes later he was in action, this time low and with his feet to keep the ball out. He had no chance of Aveley’s opener though. The ball was chipped over a static Haringey defence and Teniola finished low.

Haringey’s first real shot on target should have levelled the scores, Harrison Georgiou having his shot saved by Rhys Madden from six yards out.

The last bit of goalmouth action in the half was in Haringey’s area. A corner was punched up into the air to the edge of the box and an Aveley player chipped it towards goal and Byfield made amends with a great save tipping the ball over the bar.

The second half started briskly and Haringey equalised with a touch of genius. David Olufemi received the ball in his own half and started to advance down the wing. On and on he went avoiding tackles and reached the penalty area where he got the ball to Derek Asamoah who planted it into the net.

Aveley had their own bit of skill on taking the lead again just 5 minutes later. Teniola scoring his second with a curling shot from the edge of the box which the keeper had no chance.

A series of substitutions was breaking up the game and nothing really happened until a couple of minutes to go. A free kick to Haringey 30 odd yards out was taken by Coby Rowe. If this was on Match of the Day they would be showing it every week. Coby hit it, the keeper blinked and the net bulged!

And the fireworks hadn’t finished!

The board went up to show 4 minutes and people started to move towards the exits. Going into the final minute Aveley cleared up field and the ball reached Austin in his own area, one last attack. He punted the ball, one bounce in the Aveley area, goalkeeper back peddling and misjudging. The ball was clawed back from behind the goal line and the Haringey players and supporters went wild!

Not a rare feat for a keeper to score (only another 131 to beat record), but he can be named in the same breath as Pat Jennings, Peter Schmeichel and Jose Luis Chilavert!

As mentioned before, this match is a start of 5 home league game, the next being Saturday 13th v Bury Town and then on Monday the 15th v the league leaders AFC Hornchurch. Come down and get behind the team.