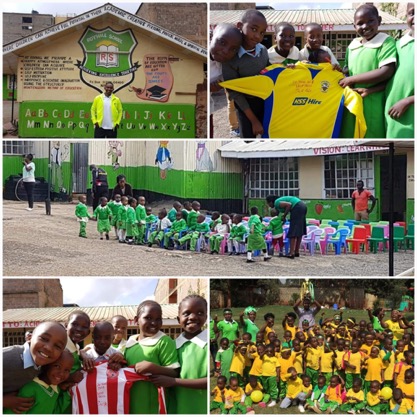 With the team on a great run of league form since our FA Cup game against AFC Wimbledon, we now return to cup action and host Leyton Orient in the London Senior Cup tomorrow (Monday) night.

It is fantastic to see Leyton Orient having such a great season and sitting at the top of the National League at their halfway point of the season. Since we hosted Leyton Orient last year in the FA Trophy and they provided great logistical support to us, we have built up a good relationship with the club and they again provided support in our hosting of our biggest ever game against AFC Wimbledon.

We also have one of our committee members, Dave Bell, who is good friends with Martin Ling (an Orient legend and their Director of Football), as they have worked together for the last few years in local community football. Whilst Haringey Borough obviously comes first, Dave gets to as many Leyton Orient games as he can so will be looking forward to seeing this one!

The links don’t stop there as both Haringey Borough and Leyton Orient have provided support to Dave in 2 trips he has made to Kenya. The 1st time October 2017 as part of his bank’s Global Citizen’s Program where he worked for Century Microfinance Bank in Nairobi for a month. Dave took some Leyton Orient kits out the 1st time and then decided to set up an ongoing support to some of the young people he met in Kenya and called his initiative the Dave Bell Foundation (DBF).

As a club we were so impressed by what Dave has done, that we agreed to provide support and play an active role in all that the Dave Bell Foundation are trying to achieve.

As part of his work with Royhill School in Zimmerman, Nairobi, the Dave Bell Foundation are aiming to sponsor economically disadvantaged children to attend Royhill School through a new scholarship program for their 2019 school year, which is January to December. Whilst Dave is personally sponsoring 1 child, he is hoping through the DBF they can sponsor more and we have agreed to sponsor another child too. The cost for 1 child to be educated via the scholarship is £280 for the full year.

We will donate our money from the gate takings to sponsor 1 child and Dave will be in the clubhouse before the game and at half time to explain to those interested in what he is doing and accept any donations which will go to support a child for the 2019 school year. We would appreciate small donations of £5 or £10 if you are able to, as for every £280 we can provide a disadvantaged child with a great education.

Below is how the DBF answer the ‘Why support us’?

Why support the Dave Bell Foundation?
The unique aims of the Dave Bell Foundation are 2-fold for supporters;
• See the impact your money makes – we want you to see how you have improved lives of young people by getting regular updates, pictures and videos from the projects, to see the impact your support makes
• Know 100% of your money goes to the project – we want you to know that every penny of your donation goes directly to the local community

We look forward to seeing as many Haringey Borough, Leyton Orient and local football fans on Monday night to support great football and the community.