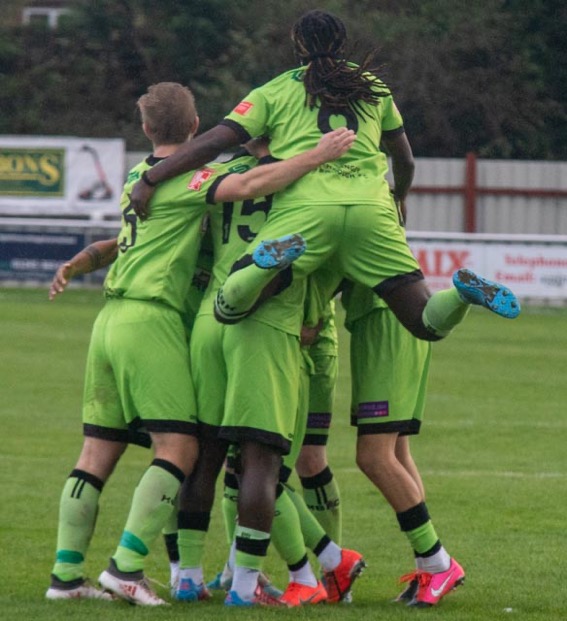 Boro eased to a comfortable win in Essex to end the day second in  Pitching In Isthmian Premier League. A first half goal from Jamie O’Donoghue followed by second half strikes from Bobson Bawling and Roman-Michael Percil sealed a comprehensive win.

Boro made one change from the game against East Thurrock with Sambu replacing Olu in midfield.

The first half started slowly but Boro played their way into the game and were soon on top with most of the action in the opponents half. Early opportunities didn’t quite materialise until the half hour when a move down the right saw Tosin cross for Aresti who swept over the bar when we’ll placed.

Corners and free kicks came as went with the best chance falling to Sambu who’s flicked header smacked against the post and away.

Aresti was, again, a non-stop presence and just before half time he made the first goal. He chased a ball to the right of the area and charged down as the keeper cleared. The ball fell kindly and he rolled across to J O’D who simply side footed into an empty net from 6 yards out.

Aside from a couple of dangerous crossing positions which Miles dealt with Boro were well on top at half time.

The second half settled into much the same pattern. Lots of Boro possession but not quite able to carve out clear opportunities.

Boro’s pressure finally told just after the hour. The ball was played to Bawling out on the left. He cut inside across the top of the 18 yard box before arrowing a low shot inside the near post.

More half chances came and went until 8 minutes from time when Percil, who’d initially been held up in the right, found the ball worked back to him near the edge of the area. A couple of sidesteps here, a shimmy there and he rifled left footed into the top corner, despite a valiant effort from the keeper. The final 10 minutes saw more Boro pressure. Mitchell had a header cleared off the line and other chances fell to Raks and Sambu following up a keeper’s fumble.

A late red card for a second booking for Brightlingsea’s Gilbert did nothing to make the hosts afternoon any better.

Miles won’t have many easier afternoons but front to back Boro controlled the game and the margin of victory reflected their superiority.