WE HAVE BEEN PROMOTED TO BOSTIK PREMIER! 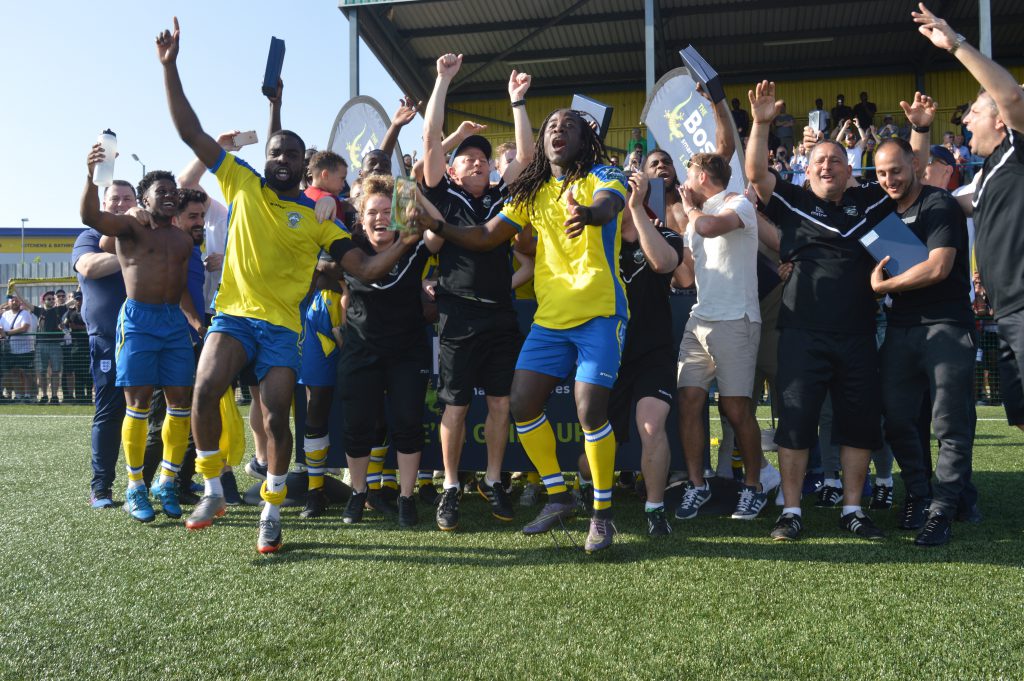 What an emotional and ultimately thoroughly satisfying day for everyone involved with the Boro after an astonishing drama filled play off final against Canvey Island. Boro went into the game as slight favourites in light of the final league standings but there are no real favourites in one off matches like these and in fact it was Canvey who came out of the blocks quickest in the searing heat and really dominated possession in the opening 25 minutes or so without threatening Pajetat in goal. The back four being superbly marshalled by the experienced Mark Kirby coped with everything thrown at them. Boro started to make inroads in the latter part of the first half creating a couple of half chances . 0-0 at Half time and all to play for.

After yet more pressure exerted by Boro they certainly looked the more likely to score with wave after wave of powerful forward attacking play which had been the hall mark of Boro’s season but the deadlock could not be broken. Boro then suffered what could have been a critical blow when Pajetat was forced to retire injured and made his way straight to hospital after damaging his hand . Austin Byfield who had performed well throughout the season when Pajetat was injured stepped into the fray and reassured the team with his positive calmness when called into action.

The deadlock was broken with just over 20 minutes to play when Kirby met a corner with a soaring header partially blocked by the keeper and then punched away by the full back although the ball had clearly crossed the line. Canvey protests being given short shrift by the referee and the goal rightly stood.More controversy was to follow when with ten minutes remaining Boro through Ralston Gabriel scored a second from the spot when the Canvey centre half was adjudged to have handled. 2-0 into injury time and it looked all over. However Canvey rallied and fought to the very end . They pulled a goal back in injury time and set up a jittery last couple of minutes. Michael Ademiluyi scoring again for Boro on the break leading to mass protest by the Canvey team and management after the assistant had flagged another player offside in the build up. After much debate the goal stood, the match finished and Boro had done it. Mass celebrations ensued and total respect for Canvey players and their massive following of supporters who in such circumstances showed class in their behaviour towards the Boro players and fans . We know from last season’s bitter experience the feelings of loss in the play offs and it can be difficult particularly when the celebrations take place before your very eyes. It’s an emotional game and the winners often celebrate without meaning offence and as mentioned Canvey took it all in good grace.

To our fans a massive thank you for your support throughout the season. Through you we have created a Club to be proud of and we hope that next season we can meet your expectations , we will have new challenges and your continued support will be invaluable. Have a great summer and see you all in August .