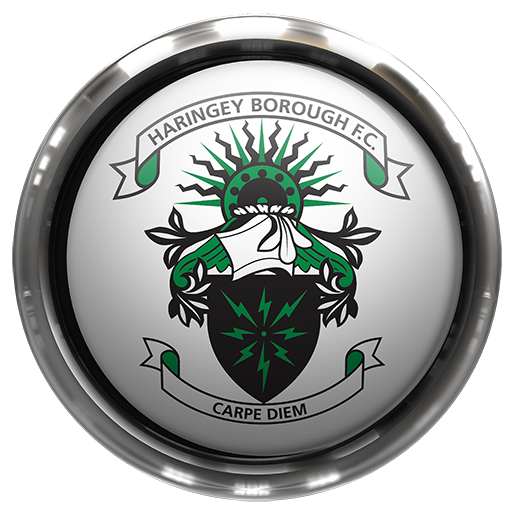 The HARINGEY BOROUGH womens team was formed at the start of season 1999/2000 and played only occasional “friendlies” in that first season.

In the summer of 2000 it then merged with Mill Hill United – at that time effectively a feeder team of National League side Wembley Mill Hill (which had itself operated under the name of Mill Hill United from 1983 to 1997   enjoying huge success)   and which had been accepted into Division 2 of the Eastern Region League for season 1999/2000, gaining promotion to Division 1 as runners-up to Saffron Walden Town while based at the rather bleak Donkey Lane Playing Fields in Enfield.

The merged Club adopted the name of Haringey Borough and re-located to the Coles Park stadium of the Spartan South Midlands League club, founded in 1907, in White Hart Lane , Tottenham.

Season 2000/2001 saw the Club finish with a run of 16 unbeaten matches but the improving team had to accept the bitter disappointment of finishing third on goal difference to runners up   Woodbridge  Town , one point behind the Divisional Champions, Haverhill Rovers, despite having won on both of those clubs grounds during the run-in.     The team also enjoyed an early WFA Cup run, eliminating two Greater London League sides – one of them a Premier Division team – before being dismissed by   neighbours Tottenham Hotspur also of that League’s Premier Division.

Season 2001/2002 saw the team make a poor start but having recovered to put together a closing run of 9 unbeaten League games promotion to the Premier Division   was secured this time round – as runners-up, three points behind Cambridge Kestrels.    The League Plate was garnered with a 4-1 victory over Cottenham United at Cambridge  City’ s ground; and the team was unbeaten at Coles Park in competitive matches.    To complete a marvellous season the Regional 5 a side Trophy was also won at Cambridge in a competition featuring 18 teams.

2002/03 was a season of consolidation in the Premier Division, which Borough actually led for two weeks in mid-season, before finishing a comfortable 4th and the season again ended on a high note by the retention of the Regional 5 a side Trophy.

Having been rocked by a sudden spate of long term injuries and departures of erstwhile regular players, the Club struggled through season 2003/04 but with a late burst succeeded in preserving its Premier Division status by finishing above three other teams.    Recruitment during the summer ensured a more successful 2004/05 campaign and the team appeared in the finals of five small sided competitions in the summer of 2004 and finished in a safe mid-table position in 2004/05 after another worrying start.    Season 2005/06 also got off to a poor start in the League but Cup successes saw the Club win through two preliminary rounds of the WFA Cup only to lose to Staines  Town in the first round proper by 2-5 after having led by two goals at the 60 minute stage.      A mid-season revival   as   the Club caught up with its League fixtures ensured mid-table comfort again with the League Cup Final appearance in which a Borough team patched up through a spate of late injuries did superbly well to go down by the odd goal in seven at Soham Town Rangers stadium against the League Champions Norwich City Canaries.

2006/07 started badly and early dismissal from all knock out competitions was a disappointment but a great improvement over the course of the season saw the Club in third place at one time before finally having to settle for fourth.     During the close season National Premier Division side Watford snapped up three of our long serving stalwarts, Nichola Cable, Sarah Cleary and Carrie-Anne Layton and despite starting 2007/08 with a very small squad and playing most games with no substitutes the much changed team did very well indeed and at one time led the Premier Division.  Three London County Cup victories including a 4-3 win over local rivals Tottenham Hotspur in the Quarter final to set up a semi-final game at Coles Park on 17th February against Millwall Lionesses in which the National League side did not score their second and  match clinching goal until the 89th minute setting up a losing final with Arsenal.     Borough went on to reach another semi-final, in their League Cup, but were again disappointed as they lost out to Hethersett Athletic by 4-2 despite twice having led.

2008/09 was an extraordinary season since in mid-March after 10 games only 6 points had been secured with relegation looking a likely outcome  but an astonishing turn round saw the team suffer only one defeat in the remaining 12 games and had that been won  runners-up spot would have been secured instead of 4th place.

2009/10 was notable for the 5 match run in the Womens FA Cup which was finally ended by South East Combination team Lewes in the 2nd Round proper.     In December the team led the Premier Division and looked favourites to win the Championship and promotion to join Lewes in the Combination but an unexpected deterioration in form finally resulted in a mid-table finish

2010/11 was a disastrous season as for various reasons many established players left the Club and a series of injuries, some long term, weakened the strength of the squiad still further,  The highlight of the season was a Womens FA Cup win on a penalty shootout although elimination followed  in the next round, but there never seemed to be much likelihood that bottom spot in the League table would be avoided and so it proved thus ending Borough’s nine year membership of the Premier Division.

2011/12 got off to a dreadful start with one point from the first three games, but that point secured at Sawbridgeworth Town was actually to prove crucial as Borough’s campaign gathered pace and they eventually finished second one point ahead of Sawbridgeworth and thus earned promotion back to the Premier Division at the first attempt.

A major development took place when the Club was struggling midway through season 2013/14 with the appointment of Steve Browne as Manager and he brought with him his highly successful S & T Academy Girls who in their mid and late teens were becoming too old to continue in Youth football.   The bottom places were just avoided and in 2015/16 a mid table position was easily secured from an uneven campaign which included convincing away wins at the top 2 Clubs and some surprisingly disappointing performances against lower placed teams. Last season, by Christmas the team were runaway League leaders only to be thrown off course by the tragic early death of Manager Steve Browne on New Years Day but after a shaky period they re-asserted themselves to win the League Championship on the last day of the season and with it, promotion to the Women’s Premier League and followed that up by adding the League Cup with a 5-1 win over Cambridge City to complete the double.  But several of the top players were lost to USA Scholarships in the close season and a torrid time ensued in Division One South-East of the Womens Premier League in 2017/18 with every game being lost and the Club returned to the Eastern Region League for 2018/19

The team began to rebuild for 2018/19 season only to see the newly appointed manager accept a role in his home Country of Greece at Christmas. Despite good performances, the team were lodged at the bottom of the league table. A new manager was appointed and the team began to gain momentum and finished the season third from bottom, four points clear of relegation.